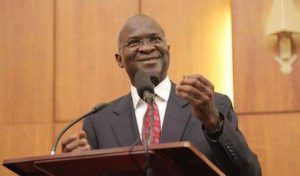 Vice-Chancellors in Nigeria universities has been advised by the Minister of Works and Housing, Babatunde Fashola, to stop giving honorary degrees randomly.

The minister called on the VCs to channel the data in their confines to guide the government, the private sector and citizens on national development.

Fashola stated this on Tuesday during a meeting with the Association of Vice-Chancellors of Nigerian Universities.

“The world is chasing, collating data; this data is sitting in our universities. Almost every lecturer asks students to write one research paper or the other. We can use it in a useful form, to inform our government, businessmen, and the society,” he said.

The Minister on Tuesday noted that the ministry intervened in the building of roads in 44 tertiary institutions.

He noted that while Nigerians condemn the President Muhammadu Buhari-led government on the state of roads, no university has come out to inform the public on the interventions.

Fashola advised the VCs to be discreet in the award of honorary degrees and give only deserving people, not those whose achievement is the occupation of a political office.

The minister also advised them to bring Professors together to write an acceptable version of the Nigerian history that will be taught in schools like it was done in some other climes.

Leader of the delegation, Professor Yakubu Aboki Ochefu, said the association, established in 1962 and had the Universities of Ibadan, Lagos, Ife, Nsukka and Ahmadu Bello at inception, now has 174 universities.

Ochefu announced a plan to produce a compendium on the 60th anniversary of the association in Nigeria.