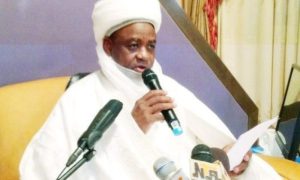 The President General of the Jamaatu Nasril Islam and the Sultan of Sokoto, Sa’ad Abubakar, has condemned Boko Haram and bandits attacks which have led to the death of Nigerians.

The Sultan of Sokoto blamed government over their inability to stop the continuous killings, kidnapping, and banditry in the country.

Abubakar called on the Federal and State Governments to wake up to their responsibilities, which is to protect the lives and properties of Nigerians.

The Sultan in a statement released through the Secretary-General of the JNI, Dr Khalid Abubakar-Aliyu, also called on the Muslim ummah(community) to pray for God’s intervention to stop the unending killings and other related matters in the country.

The statement read in part, “Jama’atu Nasril Islam (JNI) under the leadership of His Eminence, Alhaji (Dr.) Muhammad Sa’ad Abubakar CFR, mni, the Sultan of Sokoto and JNI’s President-General, is in utter shockwave over the unfortunate repeated incidences of loss of precious lives and wanton destruction of property arising from well-coordinated attacks of armed bandits, Boko Haram terrorist groups and rapists.”

“These repeated calamitous scenarios would have been avoided had the government risen to the occasion, we nonetheless as always condemn the repeated brutal acts in their entirety; especially the lackadaisical attitude of relevant security agencies that seemed to be overwhelmed, despite repeated calls by concerned and well-meaning Nigerians for decisive action.”

“We implore the government to take all genuine calls, concerns so raised and recommendations proffered so far, even from perceived and/or alleged antagonists in good fate, in order to move the country on the path of glory – human security, as development in whatever guise, is utterly incomplete without security.”

“Government should also note that citizens have a right to be listened to, over their feelings on insecurity challenge in Nigeria.”

“JNI also notes with dismay the lack of symbolic gestures to affected communities by those in authorities. They remain in their comfort zones as their subjects are subjected to arsons and killings of the highest degree.”

“Government should not reduce itself to just issuing light press statements on security upheavals.”

“Governments at all levels should do everything possible, as a matter of urgency to stop these evil acts of terror repeatedly being unleashed on innocent souls and restore peace and security, which is their first constitutional role, as inaction and silence is no longer acceptable.”

The JNI while speaking on rape cases in Nigeria stressed the need for government swift intervention through “Legislation as a tool serves as the foundation for effective, coordinated, and deterrence mechanism through legal action against perpetrators.”