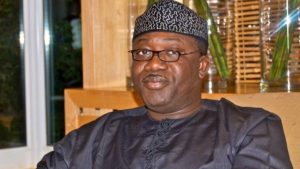 Governor Kayode Fayemi of Ekiti State has described bandits who abducted students and staff of the Government Science College, Kagara in Rafi LGA in Niger State as terrorists.

Naija News reports that Fayemi, who is the chairman of the Nigerian Governors Forum (NGF), stated this on Tuesday during a visit to the Governor of Niger State, Abubakar Sani Bello.

According to Fayemi, bandits are remnants of Boko Haram and the Islamic State in West Africa Province (ISWAP).

He stated that his visit is in commiseration, solidarity and in identifying with Governor Bello, his government, and the good people of Niger State.

Fayemi said: “We want to reassure you that even this difficult time shall pass but we must put our heads together, put all our efforts together, demonstrate resilience, reassure our people not to give up hope because ultimately we can only defeat terrorism collectively, not in isolation.

“What we are witnessing is terrorism, there is no other name for it. We may call it banditry, kidnaping, these are the remnants of the actors in the North-East that have found themselves in other parts of the country. Whether they are known as ISWAP, Shekau faction, they are remnants of what we are still dealing with in that part of Nigeria.

“That is why we must not treat the North-East in isolation of this problem. We are all victims as long as any section of our country is ravaged by this problem.

“On behalf of all your brother governors, I want to assure our people in Niger State that we are all for Niger State. We shall not rest until we resolve the challenges we have here as we have in other states.”
On his own part, Governor Bello said it was time for the Federal Government to work with the states to find a final solution to the menace.”