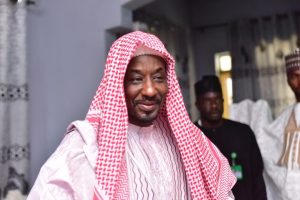 Muhammad Sanusi, Kano state former emir, has said those who are claiming to represent the country’s geopolitical zones interest are fighting for their pockets.

This Sanusi said whil speaking at The Platform, an annual conference usually organised by Covenant Christian Centre in Lagos, today.

The virtual event was held to commemorate the nation’s 60th independence anniversary.

The country has faced series of ethnoreligious crisis which has resulted in several ethnic groups calling for a referendum.

Reacting to how this problem can be solved, Sanusi said Nigerians must recognize that irrespective of political office, every citizen must be good representatives of their beliefs, religion and ethnic groups.

He said those who claim to represent the interest of southerners and northerners due to the political positions they occupy are more concerned about their pockets than happenings in the various areas they represent.

“Ethno-religious crisis is not so much from Nigerians but the Nigerian elites. We have identities in Nigeria but the construction of opposing identities, the political process, is basically the Nigerian elite competing among itself for a share of the national cake,” he said.

“I don’t think that the people who say they are fighting for Hausa, Igbo or Yoruba are really interested. I mean when they get there at the end of the day, it is about them and their families.

“There is nobody out there that is really representing north or south or east. They claim to be if you look out there in the cabinet. In the history of Nigeria, there has never been a government that does not have people from every part of the country.

“So the first thing to recognize is that we must get away from the sense that holding political office is what makes you representative of a people.”