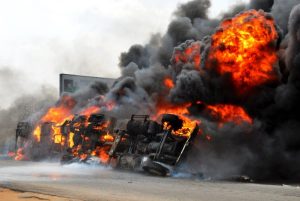 An accident that happened along the Lagos-Ibadan Expressway in the evening hour of Friday, September 4 reportedly claimed three lives.

It was reported that the horrible incident happened around Danco filling station, involving a pick-up van.

Confirming the incident, the Sector Commander of the Federal Road Safety Corps, FRSC in Ogun State, Ahmed Umar told newsmen in Abeokuta, the state capital that the three victims were burnt to death in the horrible accident.

Mr Umar revealed that the crash happened at about 4:37 pm on Friday and was caused as a result of over speeding and loss of control by the pickup van driver. He noted that the pickup van which has no registration number was on top speed when it lost control, rammed into a truck coming towards its and immediately burst into flame.

Umar revealed further that five persons, all males were involved in the accident, with one person sustaining injuries while three other persons were burnt to death.

“One vehicle was involved; a pick-up van with no registration number on it,” Umar revealed.

He continued, ”The suspected cause of the lone crash is excessive speeding which led to the loss of control and the van hit a truck in his front and immediately went into flame,”

He, however, confirmed that the injured victim had been taken to Idera Hospital in Sagamu for medical attention while the corpses were deposited at the mortuary.

In other news, a mother of six has reportedly poisoned five of her children for reasons yet unknown, Naija News reports.