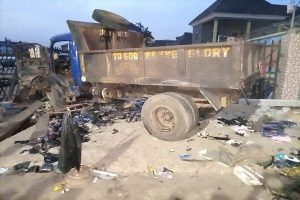 The spokesperson of the Anambra State Police Command, Haruna Mohammed, in a statement a few hours ago confirmed loss of two lives in a deadly road accident at the state’s economic hub, Onitsha.

It was reported that two ladies died in the horrible accident after a Tipper driver lost control over his wheel due to a failed brake and with a speed thrust into a car park.

Naija News learnt that the accident which happened along the Upper-Iweka Road at the evening hour of Tuesday, June 16 left no less than eight persons severely injured. Mohammed, however, confirmed that the body of the two ladies who died in the occurrence have been evacuated from the scene and deposited at the mortuary for further investigation.

He noted that the command has arrested the driver of the Tipper with Registration XA445NSK.

Speaking to newsmen on the development, Mohammed said, “On the 16/6/2020 at about 6:23pm a 911 Tipper with Registration XA445NSK driven by one Okafor Patrick Ndubuisi ‘m’ aged 55 years of Ogbauru Street, Okpoko lost control while in motion along Enugu/Onitsha Expressway by old defunct NITEL Onitsha and crashed into PN Emerah park As a result, eight persons sustained varying degree of injury.”

“Police operatives attached to CPS Onitsha quickly mobilised to the scene and rushed victims to Toronto hospital where the doctor confirmed two female victims dead on arrival while six others are responding to treatment,”

He added, “The Tipper driver was arrested and the case under Investigation to ascertain circumstances surrounding the incident. Consequently, the Command urged the public whose relations were not seen to check at Toronto hospital Onitsha for possible identification of the victims.”

In another news, Naija News had reported that the deadly Boko Haram sect in Nigeria has made fresh moves to recruit more members to join them in carrying out their acts of terrorism.