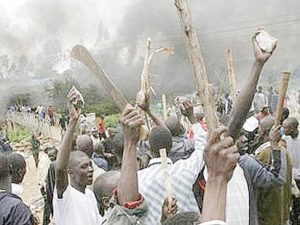 The Tiv ethnic group has withdrawn from the judicial commission of inquiry which was set up by the the Taraba state government to look into the consistent lingering crisis between the Tiv and Jukun.

Earlier this month, Darius Ishaku, the state governor had set up the panel in a bid to find a lasting solution to the recurring violence.

Through their lead counsel,  Sebastian Hon, the Tiv said they doubt the sincerity and objectivity of the panel sitting in Jalingo, the state capital.

They noted that the commission of inquiry is supposed to name all the parties, whereas, it named only the Tiv and their neighbors.

Tivs noted that that singular act is discriminatory, contrary to section 42 of the Constitution. It is also a ground, preparatory for violation of fundamental human rights of fair hearing of Tiv people.

“We raised this and the fact that the terms of reference also delved into criminality. We raised objections on all these and they overruled us. Section 2 sub 2 of commission of inquiry law of Taraba state says you must name all the parties. But only the Tiv people are named. What happens to the other parties?

They further said that even in the court, the people who were named were not listed, adding that they listed other memoranda for consideration.

“So from day 1 we are afraid, and genuinely so. So, we told them pointedly that we don’t have confidence in the composition of this panel. We also told them that there is a pending matter seeking to enforce the fundamental rights of the Tiv people at Abuja High Court. They are party to that matter and still went ahead and overruled us inspire of the pendency of that matter. So we don’t have confidence in the commission and we will not appearing again. We are not coming here again.”

Reacting, the lead counsel to Jukun Group, Abdul Ibrahim, expressed satisfaction with the withdrawal of the Tiv.

“We are here to ventilate our grievances so that lasting peace would be found between the Tiv and the Jukun. Some people have decided to step out. Fine. The fact that they are leaving does not mean we don’t have our own grievances and it is not at the whims and caprices of others for us to ventilate them,” he said in a statement.