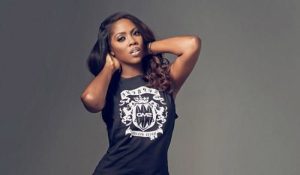 This was disclosed by DJ Spinall who revealed that the Afripop queen collapsed during the video shoot for his hit single, ‘Dis Love’.

DJ Spinall explained that the incident was caused as a result of stress and fatigue but initially got him scared.

“We had the record and we shot the video in London. She [Tiwa Savage] actually fainted at the video shoot because she was exhausted from a long trip and I forced her to come for the video shoot right away. So she collapsed on me and I was scared,” he revealed in an interview with American media personality, Ebro Darden.

It will be recalled the multiple award-winning, Tiwa Savage once revealed that when she initially returned to Nigeria, she was turned down when she approached Banky W to sign her into his music label, ‘EME’.

Tiwa disclosed this during an interview with Ebuka Obi-Uchendu.

She further stated that before she joined Mavin Records, she reached out to Banky W alongside other record labels, but they refused her.

Tiwa when asked why Banky W rejected her noted that he had a female artist he was working with at the time.

The social networking company had earlier suspended Ednut’s account [@tundeednut] which has over 2 million followers for allegedly violating its community terms.