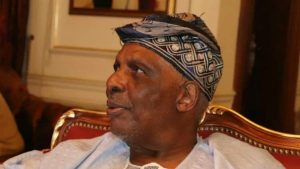 Chief Bode Akindele, the Parakoyi of Ibadanland and the Chairman of Madandola Group, has died aged 88 years.

Naija News reports that the foremost businessman and philanthropist died on Monday in his Apapa, Lagos home.

The late Akindele’s business empire operates under the name Modandola Group Of Companies, named after his mother, which translates to ‘God, if you give me the wealth, give me a child that can take care of it.’ Madandola Group spans from maritime to properties, manufacturing, real estate, investments, finance and flour milling with its headquarters in the United Kingdom.

The Fairgate Group, (a company owned by Chief Akindele, located on Bond Street, London, England), deals mainly in properties. Some of its tenants include giant retail stores such as Sainsbury and Asda supermarkets. As at the last quantification, the Fairgate Group was said to be worth over £1billion.

Among the subsidiaries of the Madandola Group Standard Breweries, Ibadan, Diamond Foods Ltd, Ibadan, United Beverages Ltd, Ibadan, Associated Match Industry, Ibadan, merged with Ilorin, Port-Harcourt and Lagos to form a company with a large share of the Nigerian market and Standard Flour Mills in Lagos.