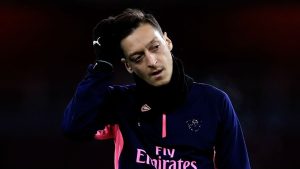 Arsenal playmaker, Mesut Ozil, is set take a pay cut to sign for Fenerbahce, according to UK Mirror.

The Germain has reached an agreement with the Gunners to terminate his £350,000-a-week deal this January.

It was gathered that the 32-year-old said goodbye to his teammates at the Emirate at the club’s London Colney training base.

Ozil will also get £4.5m bonus that will be spread across three years for simply joining the Turkish side.

The German playmaker will pocket £445,000 if he can inspire the Turkish side to the title, which would be their first for seven years.

In a related development, Arsenal playmaker, Mesut Ozil, has confirmed his plan to leave the Emirate for the Turkish side, Fenerbahce.

The Germain has been frozen out of the Mikel Arteta’s team for months.

Ozil during an interview with Turkish television channel NTV said, “I’m very happy, very excited. God has given me the chance to wear a Fenerbahce shirt. I will wear it with pride and give everything for the team.”