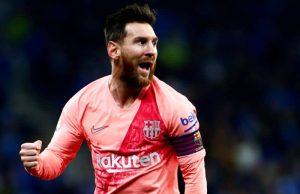 Barcelona captain, Lionel Messi, might leave the Spanish club this summer as his contract is set to expire in 2021.

Naija News Understand that  Messi is not happy with the lack of dedication from the Barcelona squad and the way the Blaugrana board are running the club.This follows their chaotic 8-2 defeat to Bayern Munich in the Champions League quarter-finals on Friday night in Portugal.

This revelation  comes from Marcelo Bechler, a Brazilian journalist who was the first journalist to break the Neymar transfer to PSG. Messi has been linked with clubs such as Manchester City, Manchester United, Inter Milan, and PSG.

“This would be the perfect week to put a bid in for the 33-year-old Argentinian and I could easily see him playing in Manchester – at either United or City.”