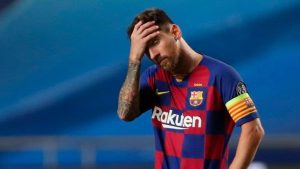 Balague while speaking with ESPN noted that the Argentina international has informed the club that he has already left the Catalan giants.

“Right now, I can tell you what his side are saying.”

“He has stopped being a Barcelona player from August 25 when he sent the recorded delivery letter saying, ‘I’m gone’.”

“So, from this point of view in his mind he’s not a Barcelona player anymore,” he added.

Speaking on the prospect of the Argentine maestro joining Premier League side, Manchester City, the sports expert added, “There will be a meeting between Jorge Messi, his agent and Josep Bartomeu the president of Barcelona.”

“Right now they are in different extremes. Jorge Messi is saying ‘we want to leave for free’ but Bartomeu is saying ‘we’re not letting you go’.”

“City are waiting. If they say it costs £100million plus his wages, they won’t be able to pay all that because of Financial Fair Play.”