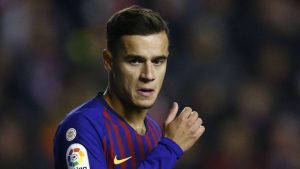 Philippe Coutinho‘s agent, Kia Joorabchian, has revealed that latest update on the Barcelona’s further at Camp Nou amid interest from Arsenal.

Arsenal manager, Mikel Arteta, is a huge admirer of Coutinho as he tries to sign one or two-player during the summer transfer window.

But Joorabchian has now insisted that he has not yet spoken to Coutinho about his immediate future, but says that the midfielder is keen to move back to the Premier League.

“He’s so focused on getting through the next stage of the Champions League,” Joorabchian told talkSPORT.

“He’s got a massive game, the club that owns him versus the one that he’s playing for.”

“So he’s in a massive situation at the moment.”

“After the Champions League has finished, whatever happens, then we will sit down.”

“I have not even spoken to him about next year. It could be that Barcelona could be the ultimate destination.”