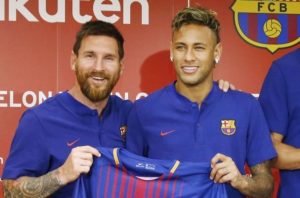 Barcelona Captain has told his former team-mate, Neymar to join him at Manchester City.

The Argentine is Keen on playing with the Brazilian again after informing the LaLiga side he wants to leave this summer.

The 33-year-old is set to work with Pep Guardiola again in England and also wants Neymar to join him at the Etihad.

The two players have spoken since Messi made it clear he wanted to leave Barca and the Argentine is trying to persuade Neymar to also leave Paris Saint-Germain.

However, it is not sure if Manchester City will be able to fund the transfers.