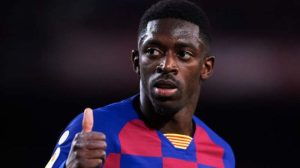 Manchester United want to sign Barcelona ‘s 23-year-old Frenchman Ousmane Dembele as a replacement for 20-year-old Borussia Dortmund midfielder Jadon Sancho, who has yet to complete a transfer.

Maybe Sancho will take the step of forcing his club to let him go to Manchester United.

Manchester City striker trend David Silva, 34 years old, will go to Lazio when his contract expired at the end of the season.

Aston Villa is set to make a move for Brentford striker Ollie Watkins, 24.

Gareth Bale will not be leaving Real Madrid this summer and the 31-year-old Wales international is set to stay on for two years until he finds a new club to take him on.

Arsenal has set aside £ 25m for Ajax and Netherlands striker Quincy Promes, 28.

West Bromwich Albion, Leeds and Fulham want to sign Ryan Fraser, 26, who left Bournemouth at the end of June.

Chelsea is set to sell 25-year-old French striker Tiemoue Bakayoko to AC Milan and are ready to lower their asking price.

Real Madrid wants to keep 24-year-old Dani Ceballos on loan after returning from a loan spell at Arsenal.

Lazio midfielder Ciro Immobile claims Newcastle have approached his agent over a possible loan move this summer but the 30-year-old Italian has vowed to stay at Serie A.