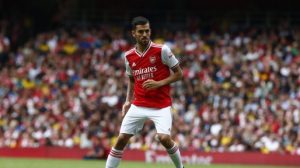 Authorities at Real Madrid football club are said to have been impressed by recent performances of Dani Ceballos at Arsenal and want to bring him back to the Spanish capital.

The Spanish club had initially agreed to extend the player’s loan deal with Arsenal but are now understood to be re-evaluating their options as they see him as a key part of the team for next season.

The most recent of his inspiring performances was the role he played in Arsenal’s FA Cup win over Chelsea at the Wembley Stadium.

The Madrid hierarchy is said to have been convinced about Ceballos’s importance based on recent performances for the Gunners.

It will be recalled that Ceballos initially arrived the Premier League on loan at Arsenal and the Spaniard quickly established himself at the club after overcoming some injury setbacks.

Arsenal boss, Mikel Arteta has openly expressed the desire to keep Ceballos in London but according to Spanish newspaper, AS, the Spaniard’s displays on the field have caught the attention of his parent club who are not hoping to keep the 24-year-old midfielder for their pre-season campaign instead of loaning him out again to the Gunners.

They are convinced that Ceballos can become a first-team regular under Coach Zinedine Zidane at Santiago Bernabeu next season.