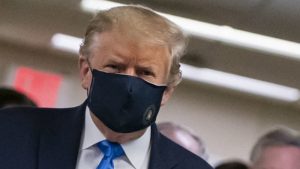 United States President Donald Trump has revealed that he and his wife, Melania, have tested positive for the deadly coronavirus (COVID-19).

The US President positive test was confirmed in a statement by White House Physician, Sean Conley.

In a letter addressed to Kayleigh Mcenany, Assistant to President and White House Press Secretary, Colney said information was released with the permission of the American leader and his spouse.

He wrote: “This evening I received confirmation that both President Trump and First Lady Melania Trump have tested positive for the SARS-CoV-2 virus.

“The President and First Lady are both well at this time, and they plan to remain at home within the White House during their convalescence.

“The White House medical team and I will maintain a vigilant watch, and I appreciate the support provided by some of our country’s greatest medical professionals and institutions.”

According to Trump’s physician, the President should be able to continue carrying out his duties without disruption while recovering.

The physician promised to keep Mcenany updated on any future developments.