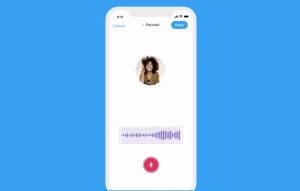 For better or for worse, Twitter has changed since its inception. Known for its character limitations when writing, the famous social network has implemented new functions, allowing you to add videos, gifs or chain messages. Things that although they added more options, it does not seem that they removed the original spirit of the network.

Today, the company announced the addition of a new feature that is considered acceptable by users, as we can now record and send voice notes in our Tweets.

As it could not be otherwise, Twitter communicated via a Tweet the arrival of voice memos, a novelty that was first started to be implemented on iOS.

The voice note recording function appears next to the icon to attach a photo, which will take us to a new screen where we can record our voice memo and publish it with the accompanying text if we wish. This will be shown to the public as a video but with our profile picture on a coloured background, allowing anyone who clicks to listen to hear our note.

Rolling out today on iOS, you can now record and Tweet with audio. pic.twitter.com/jezRmh1dkD

A new way to tweet that we will see how the community welcomes. To test it, you must have a device with iOS and it was not announced when it will reach the rest of the platforms.