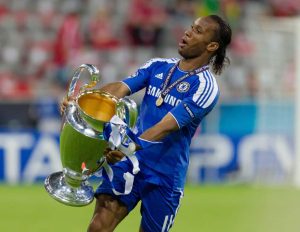 Drogba’s award was announced on Wednesday, September 30, 2020, on the official website of the UEFA.

Naija News understands that the striker was picked as the recipient of the 2020 UEFA President’s Award by Aleksander Ceferin, with the UEFA President selecting the Ivorian for his “commitment to excellence both on and off the pitch”.

Speaking on the Ivorian’s exceptional style of play and exemplary qualities, Aleksander Ceferin said, “Didier is a hero to millions of football fans for his achievements throughout his glittering playing career. He is a leader – a pioneer. I will remember him as a player for his skill, strength and intelligence, but above all for his insatiable appetite to succeed – a trait which is just as present in his desire to help others off the field of play.”

Drogba is the second African-born winner of the UEFA President’s Award after the great Eusébio, who received the accolade in 2009, Naija News understands.

UEFA president, Aleksander Čeferin – “@didierdrogba is a hero to millions of football fans for his achievements throughout his glittering playing career. He is a leader – a pioneer.”

Drogba will receive the award at the #UCL draw in Geneva.

Meanwhile, about four months ago, retired Brazilian professional footballer who played as a defender, Marcos Evangelista de Morais, better known as Cafu, hailed Trent Alexander-Arnold, said could earn himself a ‘World Best Award’ in the future should he continue with his current energy.

Cafu revealed that he enjoys watching the England born player who plays as a right-back for Liverpool FC, describing the defender as a technically brilliant player, adding that being lucky to be in a club as Liverpool would help him even get better in his career.