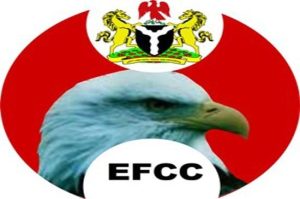 Mohammed Umar, the head of operations at the Economic and Financial Crimes Commission, has resumed as the acting chairman of the commission.

This is coming after President Muhammadu Buhari ordered the suspension of the acting chairman of the anti-graft agency, Ibrahim Magu.

Umar, who is a Deputy Commissioner of Police, is the second most senior operative at the Commission.

Information gathered revealed that there were moves to install the Secretary, Ola Olukoyede, as the chairman pending the suspension of Ibrahim Magu.

However, the appointment did not go the way of Olukoyede who is a civilian.

There were indications on Wednesday that the Commissioner of Police, FCT Command, Bala Ciroma, is favoured as the substantive chairman.

Recall that a top official of the commission, while speaking to NAN on Tuesday, said Umar was chosen by the “EFCC’s hierarchy”.

The source also disclosed that the suspension of Ibrahim Magu has not been officially communicated to the commission.