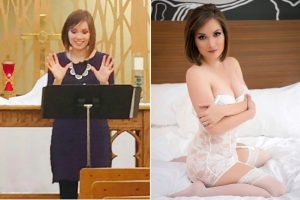 A United States Pastor,Nikole Mitchell has given up the Church, her Christian faith to become a stripper.

“I started off really timid like just topless photos, but now I’m at the point where I take personal requests and make videos very tailored to people’s specific desires.”

Nikole regularly post semi-clad images on her Instagram page to her 42,000 followers and runs a successful OnlyFans account where people pay to see explicit photos and videos of her.

The 36-year-old said she always longed to be a stripper but she grew up in a strict Baptist family so was “indoctrinated to believe her desires and body were innately sinful and bad”.

Nikole got married and became a pastor – which she said was a move seen as rebellious in her family’s eyes as a “woman’s place was in the kitchen and looking after her children.”

But when Nikole, and her now ex-husband, joined an evangelist megachurch in St. Paul, Minnesota, she had an epiphany which led to her life-changing decision. 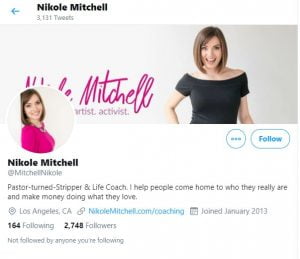