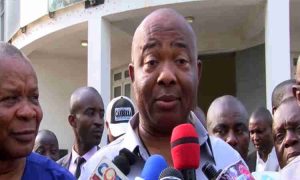 Governor Hope Uzodinma of Imo State has dismissed reports that his government is plotting to assassinate his predecessor, Senator Rochas Owelle Okorocha.

Speaking to State House correspondents after meeting with President Muhammadu Buhari, the Imo governor stated that he has no personal issue with Okorocha.

“You will recall that before I became the governor, the Ihedioha administration set up a judicial panel of inquiry to look into acquisitions and allegations of lands, converting government lands to personal property and then removing private lands from individuals and giving to other individuals,” Uzodinma said.

“The judicial panel of inquiry chaired by a judge met and they concluded our job and a white paper have since been raised.

“You know institutions and agencies that are involved with implementation are doing their job.”

He called on those aggrieved with the decision of the panel to go to court to address the issue and not take laws into their hands.

Meanwhile, Uzodinma maintained that he was right to have invited the military into Orlu community of the state.

The Governor said the military invasion is justified because certain criminal elements threatening the peace of the state had to be flushed out.

Despite the criticisms that have followed his action, Uzodinma on Tuesday maintained that the military invasion of Orlu is justified.

It will be recalled as earlier reported by Naija News that Uzodinma, speaking at a press briefing on Friday through the state Attorney General and Commissioner for Justice, Barr. Cyprian Akaolisa on why he invited the military, accused the Indigenous People of Biafra (IPOB) led by Nnamdi Kanu of planning to use the Eastern Security Network (ESN) to cause trouble in the State particularly in Orlu.