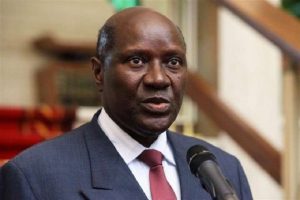 The presidency has confirmed that Daniel Kablan Duncan has resigned as the Vice President of Ivory Coast.

Patrick Achi, President Alassane Ouattara’s Secretary-General confirmed that Duncan resigned from his position on Monday due to personal reasons.

“After several talks, the last of which took place on Tuesday, July 7, President Alassane Ouattara took note of this resignation and proceeded to sign the decree terminating Daniel Kablan Duncan.”

Naija News understands Duncan was formerly the Prime Minister of Côte d’Ivoire from 1993-1999 under Henri Konan Bedié and again from 2012-2017 under the current president, Ouattara.

Ivory Coast, also known as Côte d’Ivoire, officially the Republic of Côte d’Ivoire, is a country located on the south coast of West Africa. It is a republic with strong executive power vested in its president.