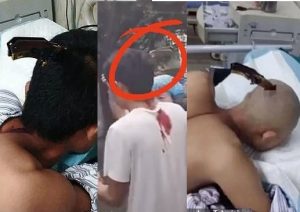 In the video, the man was covered in blood and was seen walking calmly, with a nurse holding a drip bag beside him

The knife got stuck at the back of his skull when he got into a fight on Saturday in Chongqing Fuling District.

Another photo showed the man lying down in the hospital after his hair was shaved in readiness for removal surgery.

In a statement to China Youth News, Fuling authorities confirmed that the man was attacked during a brawl and that an investigation for the case is underway.

See the video below

Meanwhile, a man has suffered a serious penis fracture, while having sex with his partner in a hotel.

A medical personnel shared a picture of the fracture, stating that the man was having vigorous sex when he hit the ”Mons Pubis”, a part of the female vaginal anatomy, resulting in his penis fracturing.