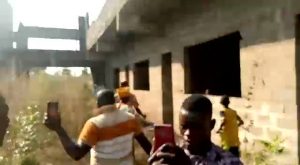 A video has surfaced on social media showing Oyo State residents chasing out some Fulani herdsmen allegedly terrorising their community.

One of the voices could be heard saying that they saw human heads and legs in the building.

The mob, however, chased the herders into the bush, assuring that they will defend their land from their attacks.

VIDEO: Fulani herdsmen terrorizing Oyo State being chased out from their hideout where they keep their kidnap victims.
Voice: In the Yoruba Language pic.twitter.com/eybCdEq2Nj