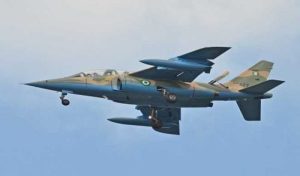 The Nigerian Military has revealed that the air component of the Operation Lafiya Dole has destroyed the tactical command center of the Boko Haram group in Yuwe, Borno State.

Many Boko Haram fighters were also killed in the airstrike carried out by the troops in the Sambisa Forest area.

This was disclosed by Maj.-Gen. John Enenche, Coordinator, Defence Media Operations in a statement on Thursday where he disclosed that the operation was carried out on June 17, 2020.

Enenche added that the airstrike was carried out based on series of Intelligence, Surveillance and Reconnaissance missions.

“In continuation of air interdiction missions being conducted under the subsidiary Operation LONG REACH to unhinge the leadership of the Boko Haram Terrorists in the North East, the Air Task Force (ATF) of Operation LAFIYA DOLE has destroyed a BHTs’ Tactical Command Centre and neutralized some of their fighters at Yuwe in the Sambisa Forest area of Borno State,” he said.

He added that; “The operation was executed on 17 June 2020 after series of Intelligence, Surveillance and Reconnaissance (ISR) missions observed significant presence of BHTs in the settlement and also established that a prominent compound with solar panel-mounted rooftop and a large tree in the middle with a nearby flag-mounted sentry post was being used by the BHTs to coordinate their operations in the area.”

“Nigerian Air Force (NAF) fighter jets dispatched by the ATF to take out the Command Centre took turns in attacking the location scoring accurate hits, leading to the destruction of the Centre and surrounding structures as well as the neutralization of several fighters.”

The Air Task force of Operation Lafiya Dole fighter jets dispatched to take out BHT Tactical Command Centre, took turns in attacking locations at Yuwe. This led to the destruction of the surrounding structures as well as the neutralization of several fighters. pic.twitter.com/7OyAytmNiW