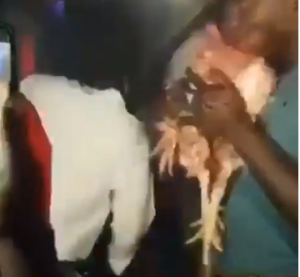 Some internet fraudsters popularly known as yahoo boys have been recorded eating live chicken as a ‘native doctor’ performed ritual on them.

In the viral video, the young men can be seen dancing to loud music as they devour the live chicken in the presence of a ‘native doctor’ chanting incantations.

It was gathered that the young men were allegedly performing money ritual.

Naija News had reported that an Anambra-based self-acclaimed prophet, identified as Onyeze Jesus, has been spotted in a video allegedly performing a money ritual for some young men suspected to be internet fraudsters popularly known as yahoo boys.

Onyeze in the video which has gone viral could be seen spraying money on the men who were inside an unclean river.

The Anambra prophet who spoke in the Igbo language warned them, young men, not to look back so their faces won’t be captured by the camera as he prayed for them to be blessed with uncommon wealth.

It was gathered that the act of spraying money inside a river is a way of sacrificing to “Agbara”, the marine spirit inherent in the water.

He further stated that the more money he sprayed into the river, the more wealth that will be accrued to them in no distant time.