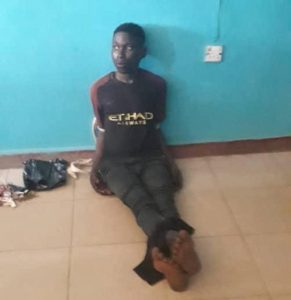 The Police on Sunday re-arrested the suspected serial killer in the Akinyele Local Government Area of Oyo State, Sunday Shodipe.

The spokesperson of the police command, Olugbenga Fadeyi, in Ibadan on Sunday revealed that the 19-year-old suspect is back in custody.

The development brought excitement to residents of the area who warned that he must not be allowed to escape again.

The President of the Yoruba Youth Socio-Cultural Association, Mr Hammed Olalekan, during an interview noted that the serial killer must be kept in safe custody to prevent a reoccurrence of his escape.

The Inspector-General of Police, Mohammed Adamu, commended the Commissioner of Police in Oyo State, Nwachukwu  Enwonwu, and his team for re-arresting the suspect.

“The IGP warned against any form of complacency on the part of the operatives of the Oyo State Police Command, stressing that all hands must be on deck to bring the case to a positive and successful closure.”

Fadiye when asked if the suspect would be transferred to Abuja and who the police would pay the N500,000 bounty placed on Shodipe’s head to, he said the CP would brief journalists on the matter within the next two days.

Ajijolaanabi further stated that his boys led a team of policemen to the residence of the suspect’s grandma in the Bodija area of Ibadan where he was re-arrested.

Ajijolaanabi said the hunters were indifferent to the N500,000 bounty placed on the suspect.

He revealed that he and his members aided the police because of their desire to rid the state of criminals.

He stated, “The boy has mentioned some names and the police and my boys are searching for those he mentioned.”

“We are not even asking the police for the N500,000 bounty, but we won’t reject it if they give us. We are doing what we are doing because we want our communities to be free of criminals.”

“The DPO of the Ojoo Police Station contacted us and some of our boys led them to where he was re-arrested at Bodija.”