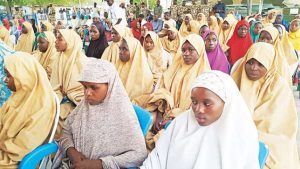 Recall that over 200 schoolgirls were in February 20218 kidnapped by members of Boko Haram from their school in Dapchi, Yobe State.

Speaking during is ambassadorial screening before the Senate Committee on Foreign Affairs on Thursday, Usman said the military got intelligence of the plot.

“There was an intelligence report on Dapchi before it occurred. We saw indicators building up but it was not managed properly,” he said.

“State governors have a role to play because if you are given intelligence, we expect troops to move in but this does not happen in the North-East because of bad roads and difficult terrains.

“There is the need to partner with state governments to deny the bandits the use of forests. We need to manage these forests.

“Unfortunately, these forests are lying fallow. We have partnerships with defence agencies in different countries and it is critical that we build these partnerships to prevent future attacks.

Also, the former Chief of Air Staff, Sadique Abubakar (retd.), said it was not possible for the Air Force to bomb the forests in order to flush out criminals.

“On bombing of all criminals, if we do this, it is not ideal because we need to ensure non-criminals are not killed. There are limitations. Even this information sometimes is questionable as some villagers connive with bandits and lure the soldiers to be killed,” he said.