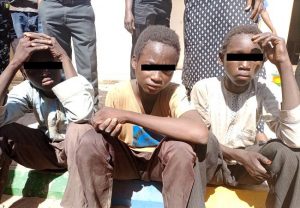 Bauchi State Command of the Nigeria Police Force has arrested some young Fulani herders for allegedly conspiring to sexually molest a young girl inside a bush.

Narrating their crimes when paraded before the force headquarters in the state on Wednesday, one of the suspects said they committed the crime to experiment what their eyes saw in pornographic videos.

Naija News understands that the three teenage herders were apprehended in the Itas/Gadau Local Government Area of the state.

Jauro, the eldest among the suspects confess to the police that he was a dropped out student of a Quranic school in Itas/Gadau LGA where he leaves.

The 15-year-old cattle rearer admitted that the girl was not his wife neither any of his fellow’s girlfriend, but that he saw the girl inside a bush and conspired to rape her.

He said: “I live in Itas/Gadau LGA. I am a cattle rearer. I used to be a student of a Quranic school there, but I have stopped attending. I was brought here (police command headquarters) because I raped a girl.

“She is not my wife; we only saw her in the bush while we were rearing our cattle. I didn’t know her before; I just heard her name when we got here.

Acknowledging his offence, another suspect who gave his name as Abdu (14), said he also raped the girl after the first suspect finished with her.

“It was last week Friday that we committed the crime. We saw her in the bush when she and her sisters went to pluck fruit. We ran after them; while others escaped, she fell and we took advantage of her. But it was only the two of us that did it; the third person held her while we violated her,” said Abdu.

On his part, the third suspect, Saleh (13) told the police that he did not take part in the act. He said: “I only held her for a little while to enable them (pointing to his friends) to have their turns.”

The Police Public Relations Officer, Bauchi State Command, Ahmed Wakil, while responding to the incident, told newsmen that the suspects had committed the crime on Friday, January 8, 2021.

He noted that the three suspects were arrested after the victim and her parents reported the matter to the police.

In another news, Naija News reports that a lady whose name is yet to be revealed has escaped death after she was shot by suspected armed robbers for resisting a rape attempt on her.

Naija News understands that the incident happened on Wednesday, January 13 at Agip Flyover, Rumueme, in the Obio/Akpor Local Government Area of Rivers State.