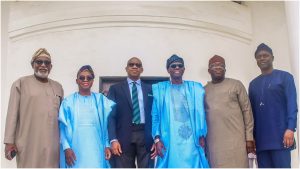 South West Governors have slammed the Senate President, Ahmad Lawan, for accusing them of inciting the recent ethnic violence, which erupted in some states in the region.

Naija News reports that Lawan, in an interview with the BBC Hausa Service, said the governors caused the crisis in some Southwest states through their unguarded utterances.

He described what happened in Shasha market in Ibadan, Oyo State where Hausa and Yoruba traders clashed, as a failure of leadership.

But in a statement on Monday by his media aide, Olabode Olatunde, Chairman of the South-west Governors’ Forum and Governor of Ondo State, Rotimi Akeredolu (SAN), berated the Senate President for his comments.

The governor described the statement credited to Lawan as unnecessary and uncalled for, adding that the Senate President should be working towards the unity of the country and not tearing it apart.

Akeredolu said the governors would not engage in a media war with any person or group of persons on matters affecting the security of residents of the country especially in the South-west.

He said: “At the risk of being repetitive, the Governor Akeredolu-led South-west governors will not go into the arena of media conflict with crisis entrepreneurs and divisionists.”