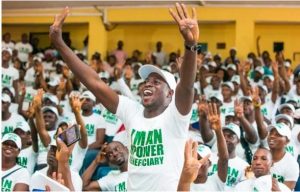 The Minister made the disclosure on Sunday night via a series of tweets from her verified Twitter handle.

As previously reported by Naija News, over five million Nigerian youths applied for recruitment into the Npower scheme before the portal stopped receiving applications.

Only 400,000 persons will be chosen from the pool of applicants, the federal government had earlier disclosed.

“As we embark on the review process, efforts are in high gear to clear the stipends for Batch A and B before onboarding the new set of beneficiaries,” the Minister tweeted on Sunday.

With the Minister’s announcement, the recruitment process has officially entered the next stage which is the review process.

In the review stage, successful applicants will be given the opportunity to write an assessment test, and those who pass the test will be allowed to proceed to the next stage which is physical verification.

Those who scale through the physical verification stage will then be posted to their places of primary assignment as well as conclude the onboarding process on the NPVN portal.

However, the Minister has disclosed that the government is working towards clearing the backlog of stipends owed the exited Batches A and B beneficiaries of the scheme before onboarding can begin for Batch C beneficiaries.