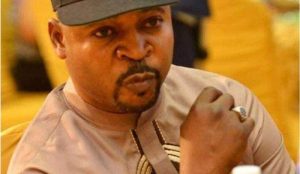 Musiliu Akinsanya (aka MC Oluomo), Chairman of the Nigerian Union of Road Transport Workers (NURTW) Lagos State Council, has warned drivers not to take laws into their hands.

MC Oluomo was reacting to a clash between operatives of the Lagos State Taskforce on Environmental Sanitation and commercial motorists on Wednesday that reportedly led to the death of a bus conductor, Wasiu Kolawole.

He assured union members who had come to the NURTW headquarters to protest the killing of Kolawole that the police the authorities would arrest and prosecute the culprits.

“We have confidence in the leadership of Commissioner of Police (CP) Hakeem Odumosu and the Taskforce Chairman, Yinka Egbeyemi to do justice on the issue at hand,” MC Oluomo said.

“CP Odumosu does not condone the harassments of members of the public not to talk of the union by police officers.

“We know the Taskforce Chairman, Egbeyemi did not direct the officers to harass our members. We also know that some of those officers are just being overzealous but no leader will watch his followers being molested and harassed for doing their daily job. At the union level, we maintain a good relationship with all police formations especially the Taskforce.

‘’Whatever issues the officers on the fields have with our members, they should inform us and we will act swiftly on them. Going to impound their vehicles daily and subjected them to heavy fines is unfair.”

The NURTW boss also pleaded with the Police Commissioner to order the release of the corpse of Kolawole to the union.

“I learnt the Police Public Relations Officer (PRO) said the conductor is not dead. Let him disclose the hospital he was taken to for us to visit him.

‘’The police should release those arrested with their buses. They were there to protest the “killing” of their colleagues before they were arrested,” he said.