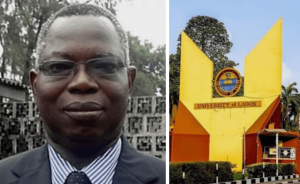 Prof. Omololu Soyombo, the new acting Vice-Chancellor of University of Lagos (UNILAG), has pleaded with members of various unions in the institution to support him.

He made the plea during his maiden meeting with the unions at UNILAG Senate building on Wednesday.

The acting VC thanked unions for their support and for warmly receiving him.

Soyombo said: “I want to thank all our unions. I see it as a call to service to the university; it’s in this regard that I accepted the post.

“We all came here to work and it behoves us to make it better than we met it.

“We should not allow the ship of this university to drift.”

According to the acting VC, his immediate plans for the institution was the welfare of staff.

He stated that staff members were the core asset of the university.

“My major focus will be on staff welfare. My belief in this regard is that human resources (staff) are the core assets of the university and any organisation. Otherwise, we cannot achieve anything,” he said.

Also speaking to the press after the meeting, Soyombo said he assumed the post on August 12, 2020 and as such would ensure he lifted the institution to a higher pedestal than he met it.

“We shall ensure effective delivery of lectures by upgrading our teaching facilities, provide modern multimedia platforms, projectors and upgrade research facilities for better performance because the university is the repository of knowledge,” he said.