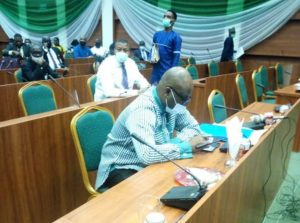 Naija News reports that this was after he slumped on the floor of the House during the ongoing probe of the Commission by the House Committee on NDDC.

Below are important information to know about Pondei:

Pondei is a Professor of Medicine from the Niger Delta University (NDU) in Bayelsa.

He was appointed as Acting Managing Director of the NDDC on February 19, 2020 by President Muhammadu Buhari.

He replaced Joi Nunieh, an Ogoni-born lawyer and activist, who is the daughter of the first Ogoni lawyer.

He took over the helm of affairs of NDDC on Thursday, February 20, at the Commission’s headquarters in Port Harcourt.

Professor Pondei obtained Bachelor of Medicine, Bachelor of Surgery MBBS, from the University of Lagos and later proceeded to the School of Molecular Medical Sciences, University of Nottingham for his PhD in Microbiology.

He attended Federal Government College, Port Harcourt and has been a lecturer since 2001. He has been described as “an experienced lecturer with a demonstrated history in working in the research industry”.

He delivered the 36th lecture series of the Niger Delta University on April 17, 2019 with the topic, “Viruses: Ignored, Neglected, Poorly Understood with resulting devastating consequences”.

He is a member of the Board of the Bayelsa Health Insurance Scheme (BHIS) representing public interest. He has published widely and has special interest in infectious diseases.