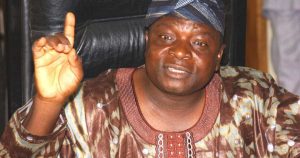 The former Governor of Osun State, Olagunsoye Oyinlola, has revealed that the All Progressives Congress will die before the 2023 elections.

The Peoples Democratic Party chieftain in a recent interview with independent, disclosed that the party was only created to achieve the ambition of President Muhammadu Buhari.

He further stated that he has no regret leaving the ruling party.

“I have been in both parties and I can say categorically that the APC is a much more disciplined party . The followership listens and respects the leadership. But that is where it ends. APC has a very scant regard and respect for the public and for public opinion. It also has a disdain for the law.”

“That makes it a danger to democracy and constitutional rule. The PDP, I can say lacks discipline among its members but it is a party that fears what the people may say if it misbehaves. That is why you could see it trying its own members for breaking the law. With APC, a sinner becomes a saint the moment he joins them.”

“The APC will disintegrate before 2023. It has achieved its purpose, which was to actualise General Buhari’s ambition. The party will die soon from its internal contradictions.” he said.