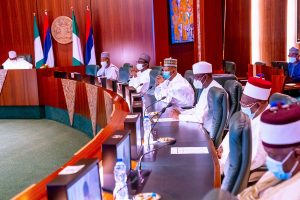 More details have emerged about the visit by elders from Borno and Yobe States to President Muhammadu Buhari at the Aso Rock Villa in Abuja on Tuesday.

Also at the meeting were the Secretary to Government of the Federation(SGF), Boss Mustapha; Chief of Staff to the President, Prof. Ibrahim Gambari; and the Minister of Humanitarian Affairs, Disaster Management and Social Development, Hajiya Sadiya Umar Farouk.

After the meeting, an aide to the Borno State Governor, Mallam Isa Gusau in a statement on Tuesday has shed more light on the visit and meeting.

He explained that security issues affecting the area, particularly as it affects the efforts of the Nigerian Military in combating Boko Haram terrorists as well as humanitarian issues touching the lives of people in the area came up for discussion during the meeting.

He said: “The interaction also discussed resettlement of the internally displaced persons to communities and villages that are safe, rehabilitation and reconstruction of major federal roads in Borno and Yobe states, among others.”

The presidential spokesman, in his statement, said the Federal Government expects more of such a verdict.

He took to his Twitter account and wrote, “We expect more of such because indeed justice is the first condition of humanity.

“We commend police authorities for earlier dismissing the convicts. Progress.”