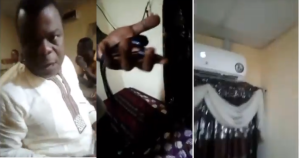 The owner of Pavilion Hotel and Suites in Aiyepe, Ogun State has revealed that he planted cameras in hotel rooms due to the rising insecurity in the country.

According to the Spokesman of the Ogun state Police Command, Abimbola Oyeyemi, the hotelier claimed that he didn’t know that it was an offence to spy on people or infringe er on their privacy.

Recall that in February, a man took to social media to accuse the hotelier of infringing on people’s privacy by planting cameras in rooms.

The police, however, invited him for questioning concerning the incident, and he failed to honour the invitation claiming that he is a resident of Lagos.

However, the police spokesperson, in a phone call with The Gazette confirmed that the hotelier showed up and also cited insecurity as the basis for installing cameras in the rooms.

According to Oyeyemi, the hotelier claimed to have seen criminals around, hence the need for the installation of cameras in the hotel.

He said: “We invited him and he came and we interrogated him and he told us the reason he did so. There is a very thick bush at the back of the hotel and he said some people wanted to be using the place for criminal purposes.

“He said there was a time he saw some criminals around that place and that is why he placed CCTV cameras there because he does not want the hotel to be used as a kidnap den.”

The spokesperson noted that the hotelier was condemned for installing cameras in rooms, adding that he has been instructed to have them removed.

“He said since that thing broke out, he has removed all the cameras there that he did not know it’s an offence and we asked him to come back, I think he’s still coming back next week,” he said.

Oyeyemi further revealed that the police have gone to inspect the hotel and will return there soon for confirmation.