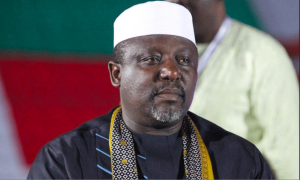 A former governor of Imo State, Senator Rochas Okorocha, has revealed why he is supporting a new political movement ahead of the 2023 general elections.

In a chat with reporters on Monday, the Senator representing Imo West said the reason is to address the silent agitations and complaints across the country against the bad state of the country.

Okorocha said he and other progressive-minded politicians are working to restore public confidence in governance and save the country from total collapse.

The lawmaker noted that Nigerians are not satisfied with the current state of Nigeria, saying that the country needs political re-engineering.

According to Okorocha, the movement for a new Nigeria has begun and all politicians must come together to make the country work.

He said the new political movement will not be like the All Progressives Congress (APC) which was hurriedly formed to take power the PDP without championing the course.

He said: “APC was a hurried arrangement, it was hurriedly formed to take power when the then government was drifting. APC would have been better until people who were not members of the party; people who came for congratulatory message hijacked the party and became Lords.”

The APC chieftain, however, noted that the political movement is being championed by people with a proven track record of achievement and public spirit.

Okorocha said: “Political parties in Nigerian don’t have any ideology; it is just a vehicle to come to power. So what we have is not the ideal thing, we have so many people who are not interested in working for the nation. Take for instance if President Muhammadu Buhari had surrounded himself with good people, the story will not be the same today.”

“We have bad people in APC, just as we have them in PDP and that was why I made the call in Rivers State that the good ones should come together to lead the people”.

Speaking on his purported 2023 ambition, Okorocha said his greatest fear is the sacrifice he will have to make as a President.

The former governor added that he had contested for President thrice and he doesn’t know what else to contest for.

Okorocha further disclosed that he has no idea about any zoning plan in the ruling APC.

“I am not aware of any zoning arrangement in APC but there may be a kind of unwritten agreement. Though I don’t believe in zoning, for the sake of equity, justice, and fairness, all the zones of the country should be allowed to produce the President of the country, so that in the end, we will know the zone that produced the best President when we consider their achievements,” he said.