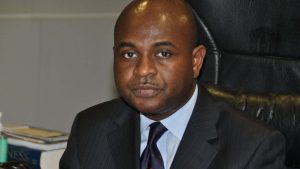 A former presidential candidate, Kingsley Moghalu has noted that the only reason why Nigeria is bankrupt is because its leadership and politics are a “grand fraud”.

According to him , the country’s problem isn’t the lack of brilliant minds but a lack of strong and effective institutions.

According to the National Bureau of Statistics (NBS) at least 82.9 million Nigerian are living in poverty.

Earlier though, data from the World Poverty Clock puts the estimate at above 90 million.

The meaning of this is that at least 40.1 percent of Nigeria’s population, excluding Borno state which has been ravaged by Boko Haram insurgents since over a decade is surviving on less than a dollar daily.

Moghalu took to his Twitter handle today to write that it is only strong economic institutions that can provide the needed opportunity for wealth creation in Nigeria.

He wrote: “90 million Nigerians live in extreme poverty and the country is essentially bankrupt not because we don’t have brilliant economists, but because our politics and leadership are a grand fraud. Prosperity requires nationhood, first, followed by strong, effective institutions.

“Without strong political institutions, we can’t have strong economic institutions that can set up an equal opportunity for wealth creation. If we don’t restructure a big, diverse country constitutionally back to real federalism, Nigeria can neither be stable nor prosper.”