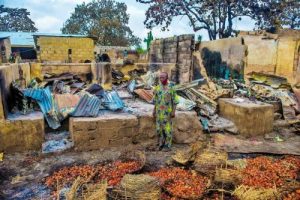 Victims of the crisis in Shasha market in Ibadan, the Oyo State capital, have vowed not to return to the area to continue their business.

Speaking with SaharaReporters on Wednesday, the victims said they will reject any plan of the state government to ask them to return to the popular market.

The traders alleged that the market space cannot accommodate more than 90 trucks at a time and their Yoruba hosts are also frustrating them.

A female victim, Mariam Abdullahi, said many of the traders had moved out of Ibadan while others have relocated to some other parts of the state.

“As you can see, that is the seventh bus taking our people back to the North. Many have gone back while many have relocated to some other parts of the state. Those of us here are trying to get a place to live. We cannot go back to that area again. We have left Shasha and we have left it for good,” she said.

She added that Chairman, Shasha Traders Association, Alhaji Usman Nyako, had discovered another market in the Iroko area of Akinyele village with enough space to offload thousands of trailers.

Another victim, Abubakar Muhammed, said he had been selling tomatoes in Shasha since 1983, saying that he will not be able to return to the North.

Muhammed slammed the poor handling of the situation by the government, saying,” We saw death but God helped us. I am not sure any reasonable person can return to Shasha again. As for me, I won’t go back. Many of our people have also decided not to go back there. I have not built a house but my goods that were destroyed were worth N2 million.

“The whole crisis should be blamed on the government. The governor didn’t respond to the issue on time and that was why there were many casualties,” he said.