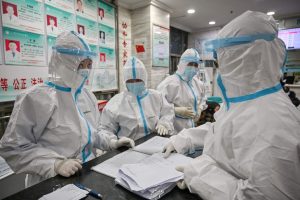 Tragedy hit a family in Delta State after a woman reportedly slumped and died upon hearing that her husband’s Coronavirus sample test returned positive.

According to the report, the woman who is identified as Mrs Oregbe slumped and gave up the ghost on receiving the news that her husband tested positive for COVID-19.

The incident which reportedly happened at Uloho Avenue, a community in the Ughelli local government area of the state, has since thrown relatives and neighbours in sorrow.

Naija News learnt that the woman was resting in their apartment on Monday when she received the report that her husband had tested positive for the dreaded disease.

A family source who spoke with newsmen alleged that Oregbe had been suffering from high blood pressure before the awful event.

“I’m sure she has been managing high blood pressure before now,” said the source who pleaded anonymity.

Reacting to the incident when contacted by newsmen, the spokesman of the State Police Command, Onome Onovwakpoyeya, said he is yet to be briefed of the incident.

In another news, a Federal High Court in Abuja has on Wednesday dismissed an appeal seeking bail for suspected kidnap kingpin, Hamisu Bala, better known as Wadume.