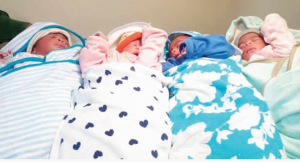 A nigerian couple  has given birth to set of quadruplets, 3 girls and a boy after 5 years of marriage.

41-year-old mother Maureen Anyaegbu  welcomed an adorable set of quadruplets,with the help of a team of 20 medical personnel in a surgery that lasted six hours.

Maureen and her husband, Nonso Anyaegbu welcomed their newborn babies at the Federal Medical Centre, Ebute Meta, Yaba, Lagos, on the 6th of August but have been unable to pay ₦700,000 hospital bill according to reports.

They have been married for about 5 years and had become worried when the 41-year-old woman couldn’t conceive.

Speaking about the jouyous experience  The husband, explained that when his wife became pregnant, they hoped for only one child, but were surprised when the scan result showed quadruplets.

However, several online sources have reported that the husband and wife are unable to go home as a result of their inability to pay hospital bill of about ₦700,000.