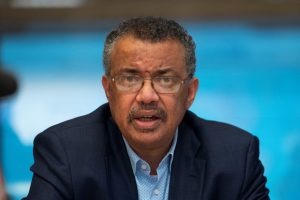 The coronavirus pandemic hit a horrific milestone yesterday as the world recorded cases of the infection surpassed 20 million.

Also, in another staggering landmark, the death toll is expected to surpass 750,000 in a matter of days.

The World Health Organization has however urged people not to despair.

“Behind these statistics is a great deal of pain and suffering… But I want to be clear: there are green shoots of hope,” WHO chief Tedros Adhanom Ghebreyesus said.

“It’s never too late to turn the outbreak around,” he said.

According to him, countries which had  successfully clamped down on COVID-19, were Rwanda and New Zealand.

In New Zealand, there are plans  to open a virus-free “travel bubble” with the Cook Islands.

A WHO overview said 165 candidate vaccines are being worked on around the world, with six reaching Phase 3 of clinical evaluation.

But the WHO’s emergencies director Michael Ryan warned that a vaccine was “only part of the answer,” pointing to polio and measles as diseases with vaccines that have not been fully eradicated.

“You’ve got to be able to deliver that vaccine to a population that want and demand to have that vaccine,” he said.

Despite the disapproval of health experts and warnings from the World Health Organization to thread carefully, Health Minister Mikhail Murashko said the treatment was “proven to be effective and safe”.