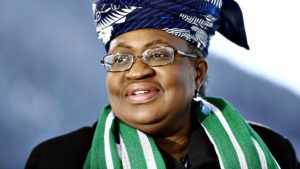 Nigerian embassy and permanent mission to the African Union (AU) has replied the legal office of the continental body over its rejection of the nomination of the former Managing Director of the World Bank, Dr Ngozi Okonjo-Iweala for the topmost position at World Trade Organisation (WTO).

It will be recalled that the Office of the legal counsel of the African Union rejected the nomination of the two-time Minister of Finance in Nigeria for the position of director-general for the WTO.

Speaking and defending the decision of the federal government, Nigerian permanent mission to the African Union (AU), said claims that Okonjo-Iweala’s nomination contravenes laid-down rules are unguarded and failed all parameters of objectivity and unbiased submission.

The Nigerian government, in its letter, said Okonjo-Iweala’s nomination did not violate any laws as it was a replacement of a previously presented candidate (Yonov Agah) and not a fresh nomination.

“The permanent mission of the Federal Republic of Nigeria will not be a party to any propaganda and/or actions that supplant the vision and objectives of the African Union, by supporting a willful, obviously partisan and outlandish interpretation of rules and decisions,” the letter read.

“It is obvious that the OLC is stubbornly trapped to the unfounded notion that the candidature of Dr Ngozi Okonjo-Iweala is a fresh submission and cleverly refraining from recognizing it as a replacement for Ambassador Yonov Frederick Agah, an earlier submission, duly made in line with all known rules.

“By the same token of illogic, does it then mean that a country whose candidate steps down as a result of natural causes or act of force majeure becomes ineligible to replacing such candidate according to OLC? Such a conclusion is not just patently wrong, but worrisome and grossly uninformed.”

“Hence, Nigeria’s substitution/replacement of Ambassador Yonov Frederick Agah with Dr Ngozi Okonjo-Iweala as a candidate for DG-WTO cannot be treated as a fresh nomination for the position, and as such cannot be said, or even imagined not to conform with any of the rules of procedure deliberately highlighted by OLC to mislead.”

It also said none of the decisions so far prevents any member state from substituting its candidate especially when a consensus candidate has not been chosen.