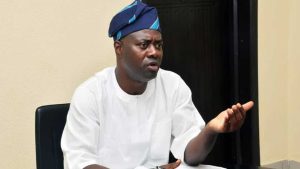 Governor Seyi Makinde of Oyo State has charged the two warring bodies of the Yoruba and Hausa speaking people in the Southwest states to sheath their swords.

Addressing the press on the Shasha market incident, the governor said people must be allowed to stay wherever they like but must be ready to take their local laws. Makinde, however, said the government will not hesitate to arrest and deal with criminals masquerading as hoodlums.

He condemned the killing of lives in the Southwest region, noting that he has called for a peace meeting between leaders of the two warring ethnic groups.

Makinde warns against further reprisal attack, urging the law enforcement agencies to step up their game and dominate the areas to avoid further loss of lives.

On his part, the chairman of the South-west Governors Forum, Rotimi Akeredolu appealed to the two ethnic groups to be calm and relate as brothers. Akeredolu condemned in totality the burning down of properties by the two groups.

He also urged all indigenes of the South West to sustain the value of hospitality which they are known for and enviable virtues by remaining law-abiding.

Watch the video below as made available online by the PUNCH.

Meanwhile, the Comptroller-General of the Nigeria Immigration Service, Muhammad Babandede, has said there were no armed herdsmen in Nigeria.

Naija News reports that the NIS boss stated this through the service’s spokesman, Sunday James, during an interview with its correspondents in Abuja on Sunday, February 14