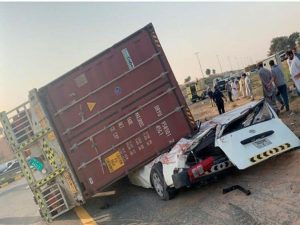 In what could be described as a tragedy, a young mechanic has reportedly died in Lagos State after a chassis frame of a 20-foot containerised truck fell on him while working under the heavy-duty truck.

According to reports, the incident happened just a few weeks for the apprentice to secure freedom from his Boss.

The horrible occurrence was said to have happened on Monday, September 14 at beside the Chivita Teashop at the Ajao Estate area of Lagos State. It was reported that the young auto mechanic was working under a loaded twin 20-foot containerised truck around 8 pm on Monday when the jack that held the truck up slipped and the chassis frame fell and crushed him to death.

A reporter with The PUNCH who visited the scene of the incident on Tuesday, September reported that he observed the bloodied scene under the truck, while the whole area was deserted. Speaking to newsmen on the incident, an eyewitness who gave his name as Bashiru Simeon, revealed that the deceased had been working on the truck for the past five days before his sudden death.

“The boy came from Ibadan to work on the truck and while he was working on it with one other person yesterday (Monday), they used a small jack to raise the chassis of the truck up,” Simeon revealed.

He reiterated, “It was five days they had been working on the truck before the young man died yesterday (Monday) and I heard that he was about to secure his freedom next month.”

On his part, while giving further explanations on the occurrence, the Head, Public Affairs, LASEMA, Nosa Okunbor, said, “On arrival, the body of a male adult mechanic was found on the floor in a pool of his own blood.

“Further investigation revealed that the mechanic was working under a jacked-up twin 20-foot loaded containerised truck and the jack suddenly slipped and the chassis frame member by the turntable hit him and he fell and died almost immediately.”

Okunbor added that the corpse was handed over to policemen from the Ajao Estate Police Division.

Meanwhile, a suspected Yahoo boy) identified as Remi in Osun State has died in an accident while escaping arrest by security men in the state.