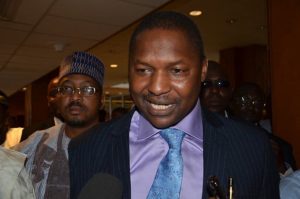 The Attorney-General of the Federation, Abubakar Malami (SAN), has berated the Chairman, Presidential Advisory Committee Against Corruption (PACAC), Professor Itse Sagay, over his comment regarding the appointment of the new Chairman of the Economic and Financial Crimes Commission (EFCC), Abdulrasheed Bawa.

Recall that Sagay had claimed in a media interview that Bawa may be unable to freely discharge his responsibilities without interference from the Minister of Justice.

Sagay alleged that Malami has been derailing the anti-corruption war of the Federal Government since he took over the position.

He added that Malami had become too powerful and must not be allowed to directly control the activities of the EFCC and ICPC.

But in a statement on Thursday through his spokesperson, Dr. Umar Jibrilu Gwandu, the minister said the statement coming from Sagay is coming from “a confused old man whose vision is beclouded by speculations and guess works.”

Malami, who slammed Sagay, denied interfering with the affairs of all parastatals under his supervision, contrary to Sagay’s allusions.

“Attorney General of the Federation and Minister of Justice, Abubakar Malami, SAN has been known to be supportive of the government agencies and parastatals under the Ministry Justice, devoid of any undue interferences, so as to enable them achieve greater success.

“It is crystal clear that the old man is working quite afar from the realities on the ground.

“The Attorney General of the Federation and Minister of Justice was never identified as meddling into nor interfering into affairs of any agency under the Ministry of Justice,” he said.

Malami said if Sagay’s assertions were accurate, the respective parastatals under the Justice Ministry would not have recorded great feats.

“Agencies and parastatals under the supervision of the Federal Ministry of Justice have been carrying out the legitimate functions and constitutional roles diligently and as such recording huge success courtesy of the support given to them by the Attorney-General of the Federation and Minister of Justice, ” he added.

Malami noted that since Sagay could commend Bawa’s credentials and yet backtrack to create doubts about his capacity to deliver, it was most likely he had ulterior motives.

“It was the same man who in the same report was quoted as showing great optimism with the appointment of the new EFCC Chairman also becoming pessimist for a speculative future.

“Sagay was reported as saying ‘so, inasmuch as the removal of Magu to me looks unsatisfactory, we have to move on and if he (Bawa) is as good as his credentials indicate, then I think the future looks promising for the EFCC.’

“Hence, there was nothing to worry about about the new leadership of the EFCC which many Nigerians hail, unless if the old man has skeletons in his cupboard.

“We advise the old man not to start having a hallucinated, mixed-up and confused vision of a prognostic future envisaged by his sentiments. Let Sagay make less noise but allow the young man discharge his duties with vigour and vibrancy.

“Nigerians will be happy if the old man would come out publically to explain reasons why he is jittery over the development which has been praised and commended by Nigerians,” the statement partly read.