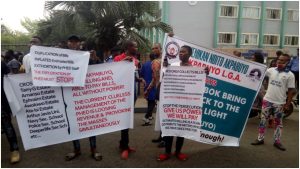 Naija News learnt that the youth trooped out in their numbers on Wednesday, February 17 to lament over poor power supply in Bakassi, Akpabuyo LGs.

The protest which lasted for hours at the Port Harcourt Distribution Company (PHDC) located along Calabar Road in Calabar Municipal Local Government Area of the State, stopped officials of the company to carry out their duties, Naija News understands.

One of the protesters who disclosed his name to newsmen as Offiong Okon, said they have suffered two years of no electricity in the areas.

He said: “People that came to protest are youths from Bakassi and Akpabuyo, for over two years, we have no electricity. PHDC disconnected us since the new management came on board and we cannot continue this way”.

When interviewed on phone a few moments ago, the Chairman of Akpabuyo Local Government Area, Hon. Emmanuel Offiong Bassey regretted the non-supply of electricity in the areas for over two years.

He confirmed that the protesters were from two different local government areas, Akpabuyo and Bakassi.

“But all we can do as a local government is to render assistance where it is necessary, such assistance includes purchasing and erecting fallen poles, provide transformers. These are the areas we can intervene but if it is for the issue of power supply we have no hand there”

“Be that as it may, when we came on board, we came to meet that problem and in one of our EXCO meetings which was the second meeting, we did send a delegation to PHDC which was led by the supervisor for works and the director of works. When they came back, the report was that the companies in Akpabuyo were not paying bills and secondly, they need accommodation in Akpabuyo

“Well, that of users not paying their bills was beyond our reach and while we were contemplating how to arrange accommodation for them, the End SARS protest came up and almost all federal institutions in Akpabuyo were affected, damage and vandalized

”Outside that, we were trying to make personal contact with the National Electricity Regulation Commission but we have not gotten a positive response and as a result of that on Tuesday we had another EXCO meeting and it was resolved that we take the matter to Abuja formerly and that is what we intend to do

“These are the steps we have taken in the local government. We got wind of the demonstration in Akpabuyo for that purpose but major stakeholders said that it would certainly be hijacked by hoodlums and resolved that if they have any issue they should go to their office in Calabar where they will see them and I heard the protest was peaceful”

In another news, the Federal Capital Territory Administration, FCTA has vowed to challenge all forms of criminal activities ravaging the nation’s capital city, Naija News reports.