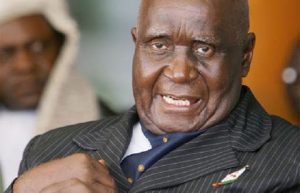 Zambian High Commissioner to Nigeria, Solomon Jere, on Wednesday, debunked the report making rounds that the founding president of the country, Kenneth Kaunda, is dead.

Here while speaking at a press conference in Abuja called on people to ignore the reports which he described as ‘’contemptuous rumours.’’

“We will like to inform all Zambians resident in West Africa, and the international community at large, that Zambia’s founding president is alive, fine and in good spirit”, he said.

Kaunda who helped in the liberation of most most of southern Africa from colonialism will mark his 97th birthday on April 28.

Jere also refuted the claims that Zambia has lost its sovereignty to China over bad debts, he noted that such reports are ‘’despicable.’’’

The High Commissioner further stated that it is not true that China has plan to take over some Zambian state-owned enterprises because of the government’s failure to settle its outstanding debt obligations to China.

“Zambia has not offered any of its assets as collateral security, for any of its bilateral or multilateral loans, and, therefore, there are no state enterprises at risk of being repossessed.”

“I want to assure the international community that the government of the Republic of Zambia is working very hard to revitalize the country’s economy, in the face of the COVID-19 pandemic,’’ Jere said.

He added that Zambia is revitalizing her economy by diversifying away from mining to agriculture, tourism and renewable energy.